Alessandro Bascioni’s work reveals a continuous artistic research within his dance language embracing dialogue, informed by openness to other cultures and forms of movement. He places the spotlight on sociological issues exploring the human condition and all its facets of emotional expression.

Alessandro Bascioni trained in African dance and undertook the research on the language of the body and movement. In between 1993/95 he studied Movement Dance Therapy and concurrently, he delved into drama and theatre. Two years later he began training in Hilal Dance and through continuous research, creating and teaching, he significantly extended the language of this form in multidimensional ways. His training, research and experiences have all continued to inform his teaching and choreographic work up to the present time.

Alessandro made his debut as a choreographer in 2003 in collaboration with the Suraya Hilal Dance Company in the work “Aseel”. Based in London for some years, he established Iskandar Dance Company in 2004 as the framework to initiate work with his own ensemble of dancers. Since then, he created many productions and went on to win the interest of critics and audience alike. The company premiered the first production “The Waterwheel” in 2006 in Tanzhaus nrw, Düsseldorf. This creation was a milestone for Alessandro’s artistic career; the work toured internationally. In the same year, the company showcased the work for a two week season at the Edinburgh Festival where he was funded by the Scottish Art Council through Dance Base, (The Centre for dance of Scotland).

“Iskandar Dance Company… There is a meditative subtlety in what the choreographer Alessandro Bascioni and his dancers achieve: The Waterwheel is like an oasis of restorative calm.” The Herald, Mary Brennan 2006

From the strength of this success in 2007, the company was invited to present the work at the Sadler’s Wells in London and later at the IMA in Paris, with sold out performances.

“Awakening”, (2007/08) exemplified Alessandro’s use of spatial, calligraphic flow with three dancers. The piece also includes solo improvisation with Alessandro and the renowned composer/musician Joseph Tawadros where their union heightens moments of virtuosity. The production premiered at the Rothebϋl Theatre Stuttgart and toured internationally. In the same year Alessandro created “Memories” a solo piece for the Suraya Hilal production “El Mizan”. This work was set to the sophisticated 18th- century Oriental music with a live classical ensemble.

Alessandro ventured into theatre, dramatising idiosyncratic movement and gesture working with the actor/dancer Mirella Maciarello in “Becoming” created in 2009. It was showcased in Tanzhaus nrw and also has been part of the Sadler’s Wells Global Dance Contest. “A’ Nour” (The Light) (2010/11), premiered in Tanzhaus nrw, a collaboration with a three percussion ensemble (Ibrahim El Minyawi, Paolo Veronica, Wassim Halal), was a high impact performance for five dancers showing the power of African ritual.

“Alessandro Bascioni, the enigmatic dancer, shows through his choreography a stately ritualistic atmosphere heightened by several leitmotif of movement recurring throughout the five sections, and produces dances which although they repeat are rarely repetitive. (…) A well hour spent at Sadlers Wells.” Dancing Time Magazine – Gerald Dowler

With the uprising world events of the Arab Spring in 2011, Alessandro examines the social and political response to the topical event of the Tunisian Revolution in the piece El Hourria (Freedom); using dance theatre and employing multimedia technology, enhancing the tension and power of the narrative.

“Burning Lands” is an audacious work in which Alessandro employed a rigorous and prolific exploration between dance and music, theatricality and intense gestures set to the sophisticated music of Ross Daly. Premiered in Tanzhaus nrw in 2013. It was restaged in 2014 supported by the Cultural Department of Comune di Roma, at the ex-Cartiera Latina.
With the breakthrough choreography of these two pieces, Alessandro draws from the principles of geometry, natural body language, defying social structures and offering a unique perspective on the body’s dynamics in space and time.

“Burning Lands – The piece through its choreography, expresses, “le mal de siècle”; the social and political dysfunction. This piece of great theatrical value and originality does not give answers or suggests resolutions but mostly, shows the audience a perspective without hypocrisy or compromise of the rawness and crudity of life. It is relentless and overwhelming!” DANZASI Magazine 2014 – Gea Finelli

Since 2008, Alessandro has collaborated closely with film maker/artist Ferdinand Cappelletti sharing the same vision in uniting two different artistic disciplines, choreography and video art. The experimental work of video performance evolved into the creation of “Boundaries” 2014; the theme develops quickly, stating that: “Identity becomes a prison when it sets the boundaries that hold back the essence of the person.” Alessandro further evolved his studious exploration to find a surrendered state of stillness in movement as response to the music leading into the creation of “Prayer” in 2015. The piece is about the facets of worship, yearning, surrender, and human invocation.

Collaborating in 2016 with the young dancer Karim Saoud, in “Beyond the Mirror”, Alessandro’s movement dramaturgy depicting a story between two characters pushing beyond each others limits in an unequivocal palpable emotional discourse. The range of action from the utmost simplicity of walking to the fullest complexity of playing between fragility and strength; through distance, reapproaching, the seeking and the repulsion, gives a poetic counterpoint to Ludovico Einaudi’s music.
Initially, it began in an experimental mode for video performance which was showcased live at Online Performance Art Festival. In 2017 the work was staged at Villa Torlonia Theatre, supported by the Cultural department of Comune di Roma and Zetema Cultural Project.

“What strikes you most in the performance “Beyond the Mirror” is (…) the cooperation, comprehension, acceptance, listening, compassion, and overcoming the solitude.” Simona Olive, OPMagazine 2017

Alessandro and Ferdinand Cappelletti continued to develop their shared passion of dance for film which can realise multiple layers of reality and emotional psychological depths. Their collaboration inspired Alessandro to create further pieces: “Compassion”, “Ascolto”, and “Mecvm”.
“Compassion”, was filmed in a dance studio with a unique approach to the choreography’s flow of energy; an ongoing exploration of the relationship between movement, light, music, and camera. Set to the melodies of the Duduk the ancient Armenian instrument; the subtle use of Cappelletti’s camera work flows with the dancer’s movement in a way that is both poignant and compelling in its support of the over all emotional impact.
“Ascolto”, is a work that infuses intensity and fragility in the way we relate to each other.
The camera and the three dancers move gracefully, calligraphically in space, merging in a calm ambience responding to the music with pure improvisation.
“Mecvm”, was filmed in nature by the sea, where Alessandro explores dance movement within nature’s elements. The camera work merges the dancer with the waves, sand, wind and the sun in a piece that explores the relationship with the self. 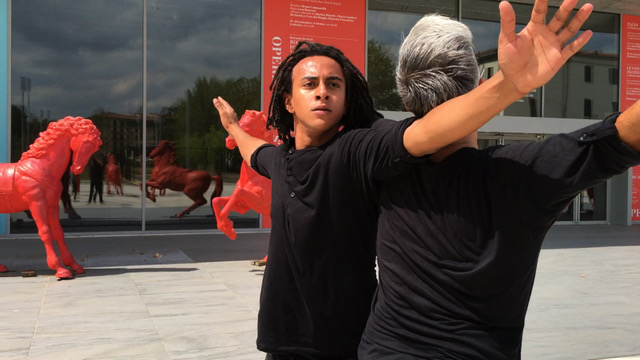 Karim Saoud, Florence born, has Italian-Algerian origins. He cames from an artistic family of painters and dancers which inspired him to try and discover his artistic potential. During his lieco years, he entered into sports and thanks to his passion for movement, started to explore different disciplines, such as Hip Pop among others. Through his curiosity for dance and movement, in 2015, he began to train with Alessandro Bascioni.

In 2016, due to his talent, he was already working in “Beyond the Mirror”, a choreographic project for dance video performance, which later (2017) became a theatrical production. In the dance, Karim developed a particolar versatility as a performer and displayed a strong presente on stage, He is currentely studying chemistry at the University of Florence and continues to collaborate in different project with Alessandro. 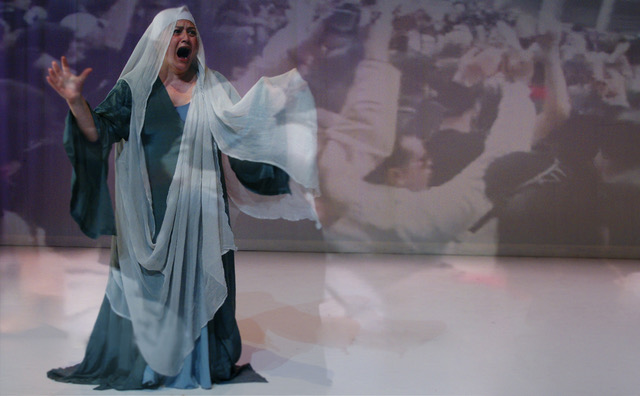 Mirella Maciariello, born in Capua, Italy, studied in Milan and graduated from Milan University with a degree in Neuropsycomotor Therapy of the Developmental Age. In 1987 she trained in the Dramatic Arts and received a diploma from the Academy of Filodrommatici in Milan. In the 90’s, after some work experience, she met Vassilij Scorik and Nicolaij Karpov which led her to deepen her training at the Dramatic School of Anatolij A. Vassiliev in Moscow. Thereafter, she was invited to be part of consecutive shows directed by him.

For the production of the Piccolo Teatro in Milan, she acted in “Quartett” by Heiner Muller directed by Emil Hrvatin and in “I Giganti della Montagna” by Luigi Pirandello directed by Giorgio Strehler. Under the direction of Anatolij A. Vassiliev, Mirella acted in the “Ione” and in “Ippia Minore” taken from the dialogues of Platone and in “Ciascuno a modo suo” by Luigi Pirandello.
Mirella continues in on going lessons in the dramatic arts held by Anatolij Vassiliev, organized by Cantiere Obraz.

In 2000, she began to train in Hilal Dance with Suraya Hilal, and in 2009, she collaborated with Alessandro Bascioni for the Iskandar Dance Company and took part in several productions including “Becoming”; “A’Nour”; “Freedom”; “Burning Lands” and continues in different projects with him. Mirella is currently working and collaborating in a project of A. Cechov conducted by Elisabetta Ratti and Gabriele Calindri. 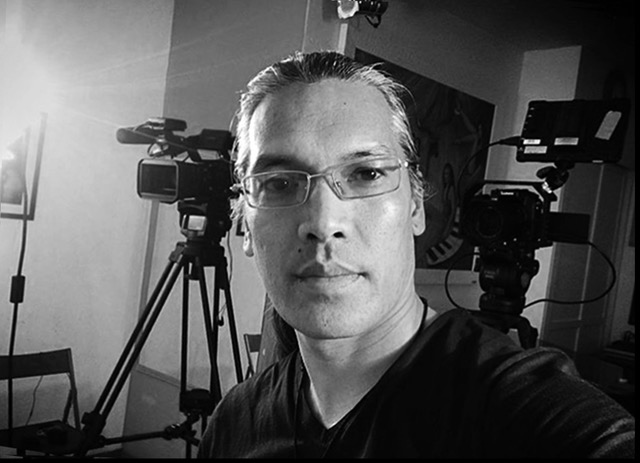 Ferdinand Cappelletti was born in Manila, The Philippines in 1970. After graduating from the Institute of Art in Florence (1990), he started work at the photographic studio of fashion of Cesare Ducci as a photographer’s assistant, graphic designer and cameraman. He studied graphic editorial theory at the Giunti Industrial Graphics in 1998, which lead him to work for the advertising agency, Area Grande Novanta (2003/04) in Prato, for art exhibitions. In 2004/07 he worked as a video operator for the Communication Agency AIDA srl in Florence for television, RAI 2 (Italia Sul 2 transmission), and RAI 3 News and music events “Italiawave”, the Lucio Dalla concert. This experience lead him to establish his own Company, Still Life Video & Design and to work with the Provence of Florence for film and video edit for a Web TV promoting the new pathway of the Palazzo Medici Museum in 2008. Ferdinand was commissioned by the Provence of Florence to realise the TV spot for the testimonial of Carla Fracci directed by Beppe Menegatti.

He began to work with dance in 2007 by collaborating with the Demidoff School of Dance. Following this, Ferdinand collaborated with Eleonora Miele and Luca Ferrante, both artistic directors of Dance Theatre Academies: The Art Show Dance Academy and TAB Teatro Arte Balletto. Throughout this period, he worked with different dance genres collaborating Linda L Melani and Silvia Bruzza. He went back to television news, working in documentaries and theatre performances. Ferdinand’s work with the Hilal Dance School began in 2010 where he collaborated with Alessandro Bascioni in projects that enhanced the union of two artistic disciplines, choreography and video art and continues this collaboration up to the present time. Ferdinand has over the years, developed a passion for filming dance, which expanded his vision of the moving body and perfected his filming technique. Using different types of cameras and special lens, he is able to capture the essence of dance and movement conveying an intimate and compelling visual journey.